One of the reasons people choose to raise their families in Garden City is because of the outstanding youth sports programs. Granted, that may mean dealing with a few overzealous parents on the sidelines sometimes, but that’s another topic. When I was growing up, I was considered a good athlete- ran track and played varsity soccer all four years of high school. Not too shabby, right? I bet a lot of people look back favorably upon their athletic glory days. Well, regardless of your past athletic prowess, allow me to deflate you ever so slightly.

Since we’re living in the hotbed of lacrosse, Inside Garden City chatted with Peter LeSueur, one of the best lacrosse players in the town’s history. Not surprisingly, Pete happens to be a product of the quintessential athletic GC family:

And you thought your family’s annual “Turkey Bowl” football game in the backyard was impressive. I haven’t even gotten to Pete yet…

At GCHS, Pete LeSueur was the only three-time All-American and has the most points in school history. He was named the LI Attackman of the Year and LI Player of the Year. He played lax at Johns Hopkins where he was a 2x Academic All American, co-captained the 2005 NCAA championship team and was named Most Valuable Attackman. If you weren’t feeling inadequate earlier, unless your father is Pele or your name is Derek Jeter… you probably are now.

Pete’s lacrosse days are not over. He now brings his engaging personality, positive attitude and expert skills to his very own GC lax summer camp (in its second year) called The PAC- Performance Athletic Club. The camp is at St. Paul’s during the week of July 21st and is for both boys and girls ages 4-7. Pete’s PAC partner is Tim Goettelmann. Tim’s impressive lacrosse resume includes All American honors both at Manhasset HS and Loyola as well as the most goals in Major League Lacrosse history.

Together Pete & Tim are a strong team now focused on igniting a passion for lax in future generations—and Garden City is lucky to have them around. With their history and expertise, its no wonder The PAC camp is the best new game in town.
http://performanceathleticclub.com/camps.asp 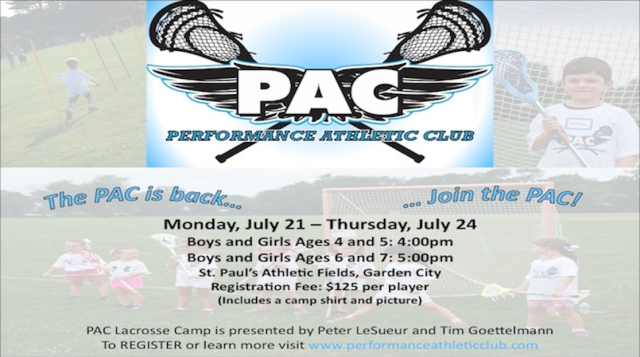