What started as a quest of two people to find the best pizza around town became a true “pizza sensation.” Thirteen pizzerias were invited to attend. Twelve judges were invited to taste. And the preparation was underway.

Pizzerias were notified of their nominations and provided with the contest rules. Judges were given instructions, tasting rules, an explanation of the scoring system and some tasting tips.

Thirteen pizzerias were asked to deliver a pie at 5pm in an unnamed, unmarked box to preserve the integrity of the “blind” tasting. The pie should be cut into 16 slices.

One contestant forgot to cut their pie into 16 slices. Tsk tsk.

At time of delivery, pizzas were accepted and assigned a random alphabetical letter. Toothpicks with printed letters were then placed into each slice of each pie to prevent confusion of pizza slices once they were removed from the box. Names on the boxes (if visible) were quickly covered. 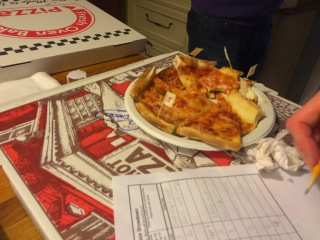 Before the day of the Pizza Showdown arrived, judges were educated on the scoring system and its categories (crust, sauce, cheese and overall). They were also provided with rules such as- Each pizza must be tasted at least once and labeled toothpicks must not be removed to avoid confusing the pizzas. Lastly, the judges were advised to be decisive and consistent, keep scores private, and most importantly- arrive hungry but not ravenous so as not to confuse really liking something with being overly hungry. 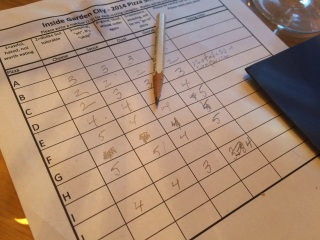 The event went forward with lots of energy and spirit. The judges were dedicated and took their job quite seriously. The pizzerias were equally enthusiactic- some more confident than others (“Just give us the prize; don’t bother having the contest”) but all in good fun. And they wanted to Bring It. The first annual Inside Garden City 2014 Pizza Showdown was ON.

Pizzas began arriving at 4:50 (Plum Tomatoes, Umberto’s GC South, Avellino’s). Some arrived exactly on the nose at 5:00 (Rustica and Louie’s). A few arrived at 5:05 (Grimaldi’s, Gino’s). Calagero’s arrived late (5:30)… or on second thought… could that have been a clever strategy to show up with a hot pie just as the others had gone cold? On the topic of strategy, Garden City Pizza sent appetizers along with their pie. Nice touch but that did not weigh into the competition.

The delivery men enthusiastically cheered on their own pies (“This is your winner” or “I’ve got the best pizza right here!”). Gotta love the enthusiasm. I was impressed that Rustica cleverly folded their pizza box inside out to successfully hide their name. No one else had thought of that (even us). Big kudos to them for thinking “outside the box”. Womp womp.

There was no dilly-dallying. As soon as the pies were randomly labeled, tasting began quickly in an effort to eat them hot. And taste we did. The room was quiet and the tone was serious. The judges (all local GC residents btw) took their work seriously. There was tasting, palate cleansing (with beer, wine and water), re-tasting, note-taking and very little talking. This was serious business and the judges obviously wanted to do their best.

At the conclusion, scores were privately and carefully tallied, checked and rechecked. The pizzerias and their corresponding random alphabetical letters were then revealed. Until this point, the judges had been completely unaware of the contestants.

A number of pizzerias were neck-and-neck in this competition. For instance, it was a tight race for best sauce with Plum Tomatoes, Rustica, Avellino’s and Grimaldi’s (in that order) all vying for the number one spot. And while Grimaldi’s won tops for crust, Avellino’s was a very close second, with Calagero’s, Plum Tomatoes and Gino’s nipping closely at their heels. In fact, Calagero’s, Plum Tomatoes and Gino’s all tied for third place in crust. But when it came to cheese, Calagero’s and Grimaldi’s blew the competition away. However, it was Avellino’s that gave the most solid performance throughout and pulled ahead for good down the stretch.

One could speculate as to why four of the thirteen pizzerias were no-shows on the day of the competition: Giaccone’s of Mineola, Umberto’s of NHP, V.I.Pizza and Gallery Pizza both of GC. Perhaps they didn’t want to accept the challenge because they didn’t think that their pie would win, perhaps they simply forgot, or perhaps they chose to rest on their laurels (ahem, you know who you are). Whatever the reason, they were missed. Hey guys- there’s always next year.

Speaking of, Inside Garden City will be having the second Pizza Showdown next year. We’ll meet again and who knows what may happen. Will Avellino’s defend the title? Will another dedicated pizzeria take what they learned from these results, tweak their pie and steal the red sauce colored belt? Will a dark horse emerge to prominence? Time will tell. Until then, thank you to all of the pizzerias who enthusiastically brought their A game and thank you to the judges who selflessly abandoned their diets and hit the gym double duty.

Please support all of the contestants and remember- even bad pizza is good pizza!

Here’s the contact info for all of the participants: