There we were at the famous Avellino’s Pizza on Nassau Blvd in Garden City South to see Randy Santel vs a 5lb pizza. The pizza was sporting a great record so far. Only one challenger had claimed victory. It was looking like pretty bad odds for Randy Santel. 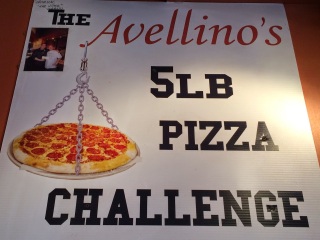 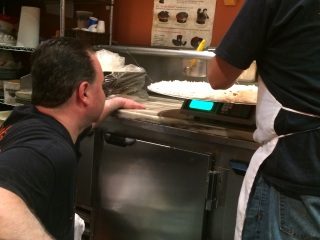 Joe, Avellino’s owner, had prepared what was easily the biggest pizza I had ever seen- a 5lb cheese pie, with meatballs nonetheless (Randy’s rationale- gotta have your protein). This pie was the equivalent of 14 slices of a normal 18″ pie. The weigh-in was at 3:30pm and the pizza tipped the scales at 5lbs. Its opponent, Randy Santel, tipped the scales at 240lbs. 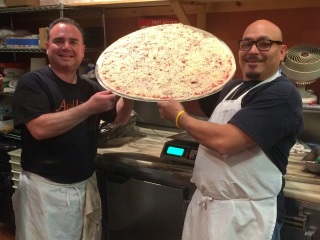 The rules in effect: challenger pays a $25 deposit to the restaurant which he wins back if he is successful, along with a $75 gift certificate to Avellino’s. He must eat every last bite in a half hour and can drink whatever he wants. He cannot leave the table and If he has a “reversal of fortune”, he is automatically disqualified. 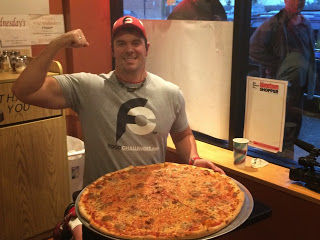 When I heard a professional eater was the opponent, I was not expecting to see someone like Randy Santel. For one, he’s a body builder. Two, he’s at least 6’4″ and looks like he could be a linebacker in the NFL (he was actually a college football lineman  back when he weighed 320lbs). I guess I was expecting an out-of-shape joker to walk in. But now at 240 lbs, Randy was well prepared, fit, serious, well spoken and super nice.

Randy showed up like he meant business. He brought knee padding b/c he kneels while eating (makes for better pictures and video), earbuds with his own carefully selected playlist (starts off easy with Miley Cyrus, Rihanna, etc. then onto Eminem as he needs to finish off the challenge) and a change of clothes. In addition to bringing his professional eating A game, he also brought a drinking buddy/sidekick/straight man to round out the entertainment with a few one liners as well as video the whole thing for his website. 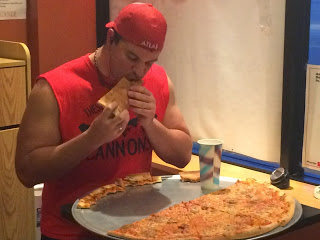 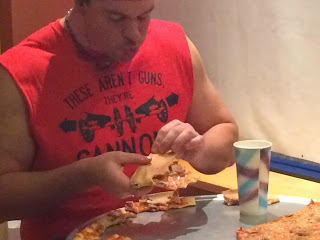 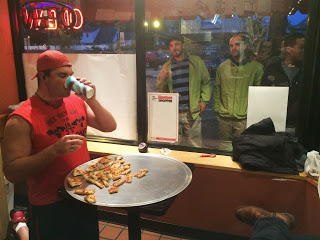 When the clock started, Randy wasted no time. He was very systematic: middle of the pizza first, then crust. This, he explained, is because the cheese and meat taste much better when warm while the crust is just as palatable warm or cold. He drank water throughout and then one soda near the finish. The soda was to fight flavor fatigue- if the flavor wanes, so does your eating and your body could turn off at that point, i.e. have a reversal of fortune. The switch to soda at the end ensures that this does not happen. The soda’s acidity also helps break down the carbs–Randy is very scientific about his eating. 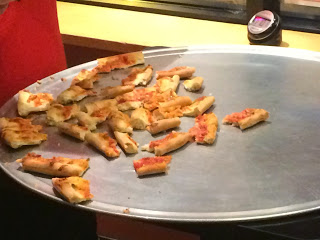 With a crowd gathered inside and out to watch the challenge, Randy was composed and in control. He actually made eating a 5lb pizza look easy. The time pressure was a complete non-issue: Randy finished in a mere 16 minutes, 15 seconds shattering the old record of 26 minutes.  Randy even asked if he could try a bite of his buddy’s buffalo wrap when he was done–an impeccably timed joke to finish off the event. He chose to donate his prize $75 Avellino’s gift certificate to Garden City’s Andy Foundation. 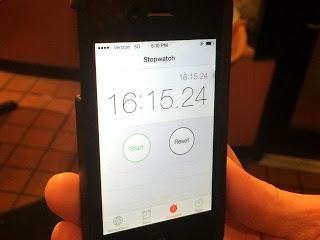 You can find The Champ on two websites. Check out http://www.randysantel.com and www.foodchallenges.com. When Randy began competing, he found that there was very limited information on how to train properly for food challenges so he started to provide this information to other eaters via his website, as well as how to locate upcoming challenges. He follows a nutrition plan that allows him to eat massive quantities and still maintain a lean physique (isn’t this the formula we’re all searching for?) 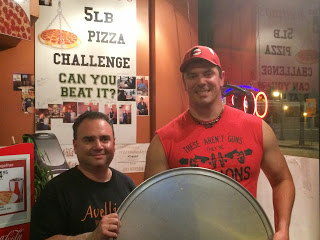 Randy is originally from St Louis, Missouri and since landing in NJ on Oct. 30th, he’s won 8 food challenges featuring many types of food. To date, he boasts a whopping 196 wins. Those impressive stats should have him well prepared for his upcoming 47 day tour eating his way through Europe.

I must say he is a very entertaining guy with a unique lifestyle and I’d be surprised if he doesn’t get picked up by a reality show soon. In the meantime, if you think you’re ready to challenge Randy and beat the new record, just call Avellino’s. They did win Best Pizza in Garden City after all. https://avellinos.ordersnapp.com/home